A question comes to mind these days at a time when Germany has tragically “redsicovered” terrorism: where is the Bundeswehr? For cultural and legal reasons, there can be no German equivalent to the French Sentinelle operation, in which the army is deployed domestically. Germany’s uneasy relationship with its 20th century past has resulted in an historical debate concerning the role that should be played by the military on internal security missions — currently the exclusive domain of the police. 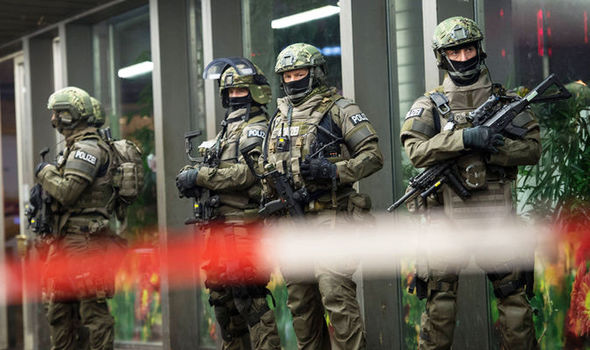 No, these are not soldiers but policemen, the only ones abilitated to ensure Germany’s internal security (Photo credit: EPA)

This debate can be explained first because of the traumas left by the Weimar Republic – when from 1919 to 1933 the army rounded up communists – then by the Second World War – during which the SS were used as an instrument of repression against the German population. A dark period that logically led to the population being deeply suspicious of the armed forces.

This cultural obstacle found an echo in Germany’s Basic Law, adopted in 1949, which states that internal security is the domain of the police. The Bundeswehr’s job is strictly dedicated to the country’s “defence” , according to the Constitution, which adds that the armed forces “may be employed only to the extent expressly permitted by this Basic Law.”

For internal security missions there is thus no question of using the armed forces who can only be called upon in “order to respond to a grave accident or a natural disaster,” as stipulated by article 35.

Given the current climate, some German politicians are calling for a change to these aspects of the Basic Law, which they claim are obsolete, and to turn the page of mistrust in the army. “We are no longer living in the Weimar Republic,” argued  Joachim Hermann, Bavaria’s Minister of the Interior last week, adding that Germany is now an “absolutely stable democracy.” The subject is in any case one of the priorities of the ruling coalition which, in a document concerning Germany’s security policy published on 28 April 2016, noted that “internal and external security cannot be separated.” The coalition added a proviso that were the armed forces to be deployed, these would nevertheless remain subordinated to the police because “internal security is first and foremost the role of the police,” as Thomas de Maizière, Germany’s Minister for the Interior, said on 25 June. Given that the Basic Law is simply a set of general and somewhat imprecise rules, some politicians are calling for an amendment to enable the German army to deploy.