Ten thousand. That’s the number of hand-held laser attacks against both civilian and military aircraft recorded since 2009 in Great Britain. These attacks, aimed at dazzling and disorienting the pilot, are also on the rise on the other side of the Channel, due, in part, to the collapse in the price of lasers. The latter, which 25 years ago cost over €100,000 can now be bought almost anywhere for less than €5.

This is what the LERapp interface looks like (Photo credit: Dstl)

Confronted with the rise in the number of attacks, the defence sector has been inventive in proposing innovative solutions. One of the latest is a smartphone application: the Laser Event Recorder app, (LERapp) which aims to improve the analysis of such attacks. The brain-child of Professor Craig Williamson of the UK’s Defence Science and Technology Laboratory (Dstl), the LERapp was developed using an iPhone. It utilises the inbuilt camera, GPS and connectivity to record, analyse and communicate details of the incident making it quicker and easier for the police to arrest and prosecute offenders, deter the targeting of aircraft and allow pilots to take steps to prevent themselves from being dazzled. The app can be modified for use on Android phones and other platforms.

The benefits of the LERapp are that it:

This is not Dstl’s first foray into this sector: in 2012 it developed and tested a prototype of eye-glasses designed to filter a wide range of laser beams. Thanks to its composite structure which integrates a layer of polycarbonate to an absorbant optical surface applied onto a thin glass lens, this technology could soon become an essential element of every soldier’s individual protection. 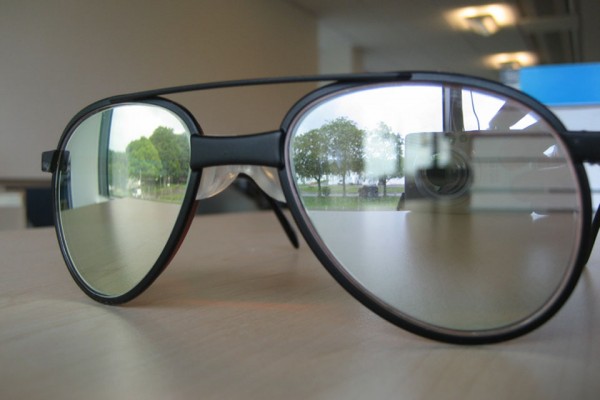 The anti-laser glasses developed in 2012 by Dstl (Photo credit: Dstl)

Dstl has signed an agreement with US company Profound Technologies to develop and market the LERapp which is expected to be available in the summer of 2017.

LERapp could also be used in a wide range of non-aviation users. This includes car drivers, police officers and armed forces.

The contract is the first to be signed using Dstl’s Easy Access IP contracting framework. This has been designed to help commercialise IP that is at a very early stage in its development or where there are significant financial risks and uncertainties. Easy Access IP allows companies to develop and refine the work at no cost. This allows Dstl to bring products to market that will benefit the economy and society that would otherwise not be available.

Manufacturers are also working on the subject. In 2014 Airbus, in partnership with Canadian company Lamda Garde, launched development of a transparent film which can be applied to glass and can block the 532 nanometre laser beam, the one most frequently used in these attacks against aircraft. Tested in real conditions since 2015, this filter could later be adapted for military use and be integrated on all types of military vehicles.