The British Army will lose one of its three tank regiments next year but will instead gain two new Strike brigades equipped with Ajax and Warrior vehicles, said the Secretary of State for Defence, Michael Fallon, in a statement made on 15 December. This reorganisation is just one of the proposals contained in Army 2020 Refine, a document which refines the Strategic Defence and Security Review (SDSR) 2015 which Fallon hopes to deliver before the end of his mandate in 2020. 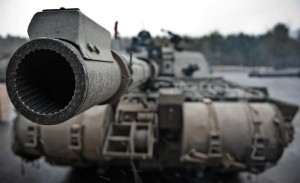 One of the three Challenger 2 regiments will be replaced by a Strike brigade (Photo credit: Crown/Cpl Ross Fernie)

Centred partly on these two Strike brigades and the incorporation of a new generation of tracked vehicles, the plan actually entails a massive reorganisation of the 3rd (UK) Division. The latter will move from a triangular structure based on three tank regiments to a square one built on two tank regiments and the two new Strike brigades. Providing “a significant uplift in capability, it will hold one of each at high readiness, rather than the current single armoured infantry brigade,” Fallon stated.

If the British Army appears to be gaining an additional armoured unit, the disappearance of a tank regiment and its replacement by a Strike brigade worries observers. They note that the very idea of rotating between the four units is absurd given the very different doctrines of use for a Challenger 2 and an Ajax. According to some specialists, this reorganisation is based on economic considerations, and seeks above all to camouflage the fact that the tank is being sidelined because there are no funds to upgrade it.

“To develop and transition to this new posture, in 2017 the Army will launch a Strike Experimentation Group in Warminster. This will ensure that the first new Strike Brigade will be formed by the end of the decade,” Fallon said. “In 2017 the Army will also create the first two new Specialised Infantry battalions to pioneer this new capability. A new Group headquarters for the units will be established, initially based in York alongside the 1st (UK) Division of which the Group will be part, before moving to Aldershot by 2020. To reinforce this capability the Army plans to create two further Specialised Infantry battalions by 2019,” he explained.

Some Challenger 2s will be replaced by the Ajax (Photo credit: UK Defence Ministry)

“They will conduct defence engagement and capacity building, providing training, assistance, advice and mentoring to our partners,”  Fallon said.