Will there soon be a Belgian equivalent to the French special operations command (SOC)? This, in any case, is what Belgian defence minister Steven Vandeput, is aiming for if one looks at his 2030 defence plan, the lion’s part of which goes to strengthening and completely reorganising Belgium’s special forces under the umbrella of a future Special Operations Command (SOCOM).

The 225 men and women of the Special Forces Group will be at the heart of the re-organised Belgian special forces. (Photo credit: Mil.be/Daniel Orban)

Until now the special units (essentially the Special Forces Group and the 2nd and 3rd paratroop commando battalions) were integrated into the Light Brigade but they will now form a separate unit soberly baptised “Special Operations Forces” and made up of 1,309 soldiers, almost a third of the official numbers that make up the SOC. Amongst these, 225 personnel will be members of the Special Forces Group (SFG), the real kernel of the special forces. The remaining thousand soldiers will be split, 984 in the two Ranger bataillons and the rest amongst various support groups who together will form the Special Forces Support Group (SFSG) whose principal mission, as one might surmise from its name, will be to support the action of the SFG. One of the two Ranger battalions will be amphibious and the Belgians are looking into the possibility of training it by integration with a French or Dutch navy infantry unit.

Another novelty is that the Belgian special forces will be supported by 38 personnel from Special Operations Aviation which, between now and 2027, will get four new short take-off aircraft for a total of €130M and possibly equipped to undertake close air support, intelligence or medical evacuation missions. This capacity might be consolidated by an engagement of NH90 helicopters equipped with specific kits.

In addition to this air segment, the Belgian special forces will have a €167M equipment procurement budget. Apart from the modernisation of personal weapons, Belgium has earmarked €54.9M to procure a Light Troop Transport Vehicle in around 2021 to complement the Fox Rapid Reaction Vehicles that are currently being delivered. Belgium has also expressed interest in the vehicles France has developed for its Scorpion programme because “a collaboration with France could offer a good opportunity to effectively back up our motorised capabilities.” 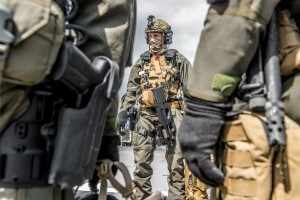 This ambitious plan is the result of the “Strategic Vision for Defence”, energetically supported by Vandeput and finally approved on 29 June by the Belgian government after months of debate. Its major idea is “a Defence with 25,000 full-time equivalent jobs and a budget to invest in major equipment of €9.4bn until 2030.“